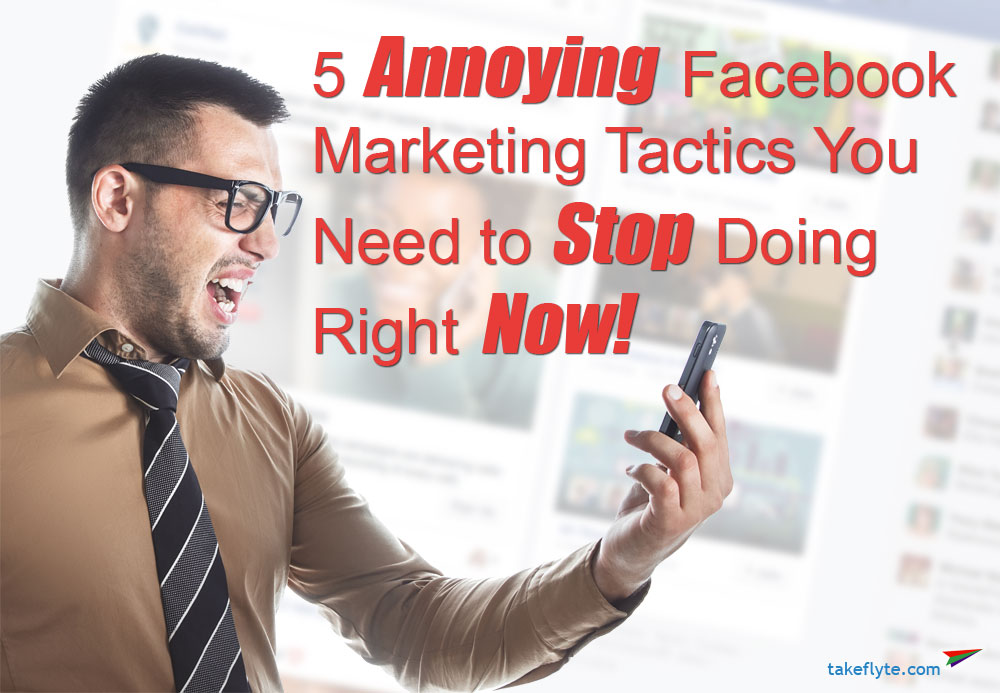 Yes, we all know that Facebook’s organic reach for business pages is way, way down these days. It’s tougher than ever to reach people on the world’s most popular social network, even those who already like you.

But that’s no excuse for anyone to engage in these five incredibly annoying Facebook marketing tactics that will alienate—rather than engage—your audience.

And yes, I’m talking to you. And to me. I’ve probably been guilty of a couple of these things. Although not #2. Never that one.

1. Tagging everyone you know in your posts.

Tagging someone on Facebook means that your post will show up on their personal profile. It also increases the chances that their friends will see your post, even if you’re not friends with them.

The purpose of tagging is to include people in your posts and photos, ostensibly because they were in your photos or part of your update.

Or they call attention to a post, such as when a friend wants to draw your attention or wants your opinion on something. 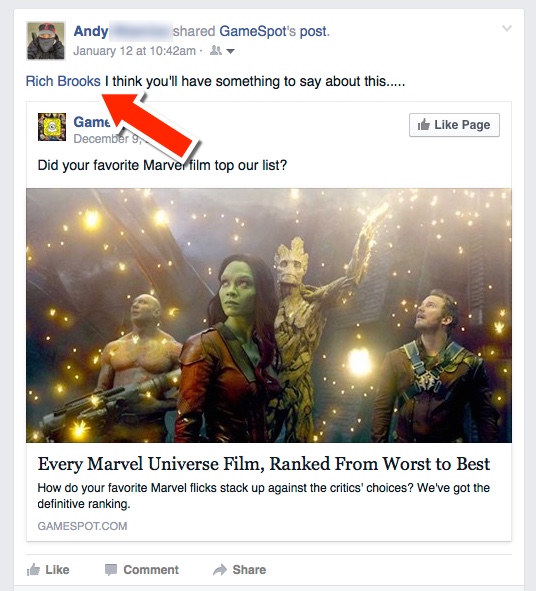 Businesses have pretty limited tagging capabilities, but people can tag just about anyone and anything.

And because of this, some people have chosen to abuse this privilege by tagging everyone in the free world in their post, in a desperate plea for attention. Download my e-book! Listen to my new single! Pay Attention To ME!!

Did you take the time to un-tag yourself? The worst offenders often repost a virtually identical update, tagging you all over again.

If someone was on your podcast, or co-wrote a song with you, or mentored you in some way and you want to thank them publicly, tagging them is fine. But pulling crowds of people into a self-promotional post, especially on a recurring basis, is something that needs to stop happening now.

Guilt can be a powerful motivator. Just ask my kids.

But is that the emotion you want people to associate with your brand?

Now, there’s nothing wrong with being religious. However, there is something very wrong when a business leverages religion to garner likes, comments, and shares.

By the way, I’m not talking about churches, temples, mosques, or any other type of religious entity out there. I’m talking about the law firms, auto repair shops, and debt collectors I’ve seen use this tactic.

Talk about taking the Lord’s name in vain!

Telling someone that they’re choosing Satan over God if they don’t share your post, or that their eternal soul hangs in the balance if they don’t type “Amen” in the comment field, is not about being religious. That is not faith. That is manipulation.

Likewise, I’ve seen actual updates in my newsfeed that tell me if I scroll past your post about child abuse or animal abuse without liking, commenting, or sharing, I’m supporting the abusers.

Truth is, there’s a cottage industry of scammers using these techniques to game Facebook into giving them undeserved visibility in the newsfeed. Don’t feed the trolls, and don’t become one of them.

Not sure if a post crosses the line? Just ask, WWJD?

3. Adding people to groups without their permission.

Facebook allows us to add people to groups without their permission. And in some cases, this is a good thing. It makes it easier when you can quickly populate a Facebook group about an upcoming reunion with the members of your extended family. Or if you’re running a mastermind, it’s great to be able to create a space that everyone can share ideas with in between meetings.

But once again, some people have taken advantage of this opportunity and turned it into frustration for the rest of us.

They create a “group”, add everyone they can find, and then bombard the group with thinly-veiled sales pitches in the form of status updates.

Suddenly your notifications are filled with these “amazing” updates from groups you never remember joining in the first place.

4. The Friend to Ask campaign.

Have you ever accepted a friend request from a person with a lot of connections to you, even though you’re not entirely sure that you’ve met in real life?

And then seconds later you receive a chat request, asking you to like and share a page for a [insert random business] in [insert random place you’ve never visited]?

I’m not suggesting that you can’t use Facebook like LinkedIn: as a way to grow your network. After all, there’s no one right way to use Facebook.

However, a better way to build rapport would be to offer something of value, not just asking for something. And no, I don’t mean that free e-book you’re offering on your site.

Have you ever been at a coffee shop and some jackaninny is talking way too loud on his phone…as if he’s broadcasting his conversation for your benefit?

Does anyone respect that guy? Like that guy? Or are we all fantasizing about “accidentally” knocking his coffee on his lap as we pass?

I know, you’re trying to save time. Trying to reach a wider audience without any extra work.

However, when people on Twitter see seven “tweets” in a row saying you’ve just posted a picture on Facebook, or when it appears that you’re asking a question on Twitter but actually the question appears on Facebook, you’re not really engaging us. You’re just showing that you’re busy elsewhere.

You’re that guy at Starbucks on his cellphone.

So, those are five things you should stop doing immediately. But it doesn’t help you in terms of increasing your visibility on Facebook or generating any leads or business from the platform.

That’s what these next three tips are all about.

1. Show off your personality. 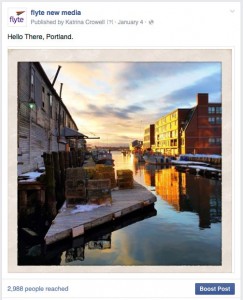 Show off what makes you, YOU. At flyte, we get our highest engagement when we post the sunrise coming up over Casco Bay. Or when we post pictures of us on a company outing. Or when we’re celebrating St. Paddy’s day with a Guinness at lunch. (Our unbiased research proves that our creative goes up after these lunches.)

Sure, I wish we got more involvement when I post a link to a recent Agents of Change podcast, but those just don’t garner the same engagement.

For your business, show your people. Show what it’s like to work there. Show how you’re part of the community. Don’t worry so much about your organic reach. Think about the people who seek you out…what do they want to see?

Your Facebook page could be an important tool for employee recruitment, or to show off your personality to prospects.

If you’re in retail, you can show of products, specials, or new displays. If you’re an inn, show off rooms or things to do around town. If you’re a non-profit, show how you’re making a difference.

Even if you’re not getting the engagement you used to get from Facebook, you can still show off your personality to create a connection between you and your audience.

When I really want a flyte post to gain visibility, I will post first from flyte, and then share it from my personal account. Because “Rich Brooks” generally reaches a wider audience than “flyte new media”, more people will see it and it will give credit to flyte’s page.

Now, I try not to abuse this approach, because if all of my posts are about 9 Mobile Marketing Ideas That Go Beyond Your Website, or 12 Reasons You Should Attend Conferences, my friends and family are going to unfollow me, and possibly uninvite me from Thanksgiving dinner.

If you’re really looking to get seen and drive traffic and sales from Facebook, then you need to advertise.

Luckily, with Facebook Ad Manager and the Power Editor, you have powerful tools to run effective ads on Facebook. You can target people based on their gender, age, geography, interests, and more. You can upload your email list and advertise to your list or prevent them from seeing an ad to attract first time customers.

Facebook ads are climbing in price, but they’re still relatively inexpensive, especially compared to Google Adwords or traditional ads in print, on radio, or on TV.

Don’t let your organic reach (or lack thereof) on Facebook get you down. Create posts that show off your personality so people can truly like you. People buy from people they like.

If you need a specific business post to go further, then share it from your personal profile.

And if you want to drive some of that Facebook traffic to your website, use targeted ads and squeeze pages to increase your conversions and ROI. (If you need help getting your Facebook Ad Campaigns up and running, just let us know. We’re here to help.)

There are undoubtedly more annoying Facebook marketing tactics we didn't list. If you’ve seen something you find irritating, please vent in the comments below!