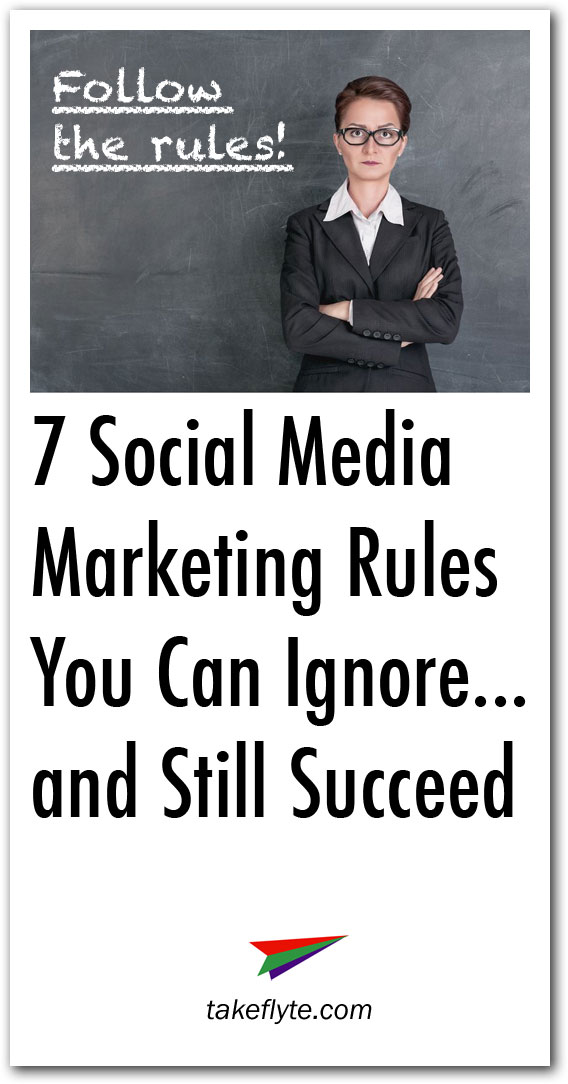 Whether you’re just getting started with social media, or you’ve been doing it a while, chances are you look to social media experts for guidance in how to behave in the social arena.

While there’s a lot of good advice out there, it’s framed as the only possible way to behave, and how every business and professional must behave. However, a lot of it is based on the expert’s personal experience, and that may be of little value to you.

Even the most well-intended advice can be completely off the mark when it comes to your small business.

There’s nothing wrong with expert advice, but when guidelines become rules, they need to be re-evaluated.

What follows are some of the oft-quoted “rules” that you need to question as you develop your own social media strategy.

Rule 1: Social Media Has Changed Everything

Hogwash. Yes, we’ve got shiny new tools, and consumers can give more public, vocal feedback on your products and services. However, leads still need to be generated, sales need to be closed and invoices need to be sent; no business survives otherwise.

And here’s another thing: networking didn’t start with LinkedIn. Before there was social networking there was real-world networking. And you know what? It came with drinks and hors d’oeuvres, so it wasn’t all that bad.

This statement is the mantra of early adopters who remember “the good old days” of social media when intentions were pure, Facebook ads were unnecessary, and spammers were still all hanging out on MySpace.

The truth is, Dell has sold million of dollars of PCs and accessories through Twitter promotions. Retailers use Pinterest to drive foot traffic and e-commerce sales. Internet marketers advertise free webinars on Facebook to build their list to sell information products.

Now this doesn’t mean that you should go out and spam everyone you can reach through social media. However, when you put the right message in front of the right person in the right social medium, sales happen.

Rule 3: You Have to Stay On Message

This is preached by many of the most successful social media experts out there. But you know who stays on message? Boring people. Politicians. Animatronic robots. If you don’t count yourself in those groups, then staying on message isn’t for you.

I’ve bonded with people over the Red Sox, Snake Pliskin and my fear of a zombie apocalypse.

In fact, my interest in zombies is so well-known that friends tweet me zombie news and I’ve even received several zombie-themed gifts at events. It seems strange, but the undead have helped build my network.

While that may not lead to direct sales—Google Analytics still doesn’t list “zombies” as a traffic source—it has helped me make new connections and opened up new opportunities that have led to business.

While zombies may not be your cup of tea, sharing your interests—whether it’s gardening, cooking or skydiving—will attract like-minded people to you and help build your network.

Rule 4: You Need to Have a Lot of Followers

When I asked my large network about expert advice they disagreed with, the number one results was having a large network.

So I unfriended them all and started from scratch.

The fear of having a small network is sold to you from the “social media guru” who’s Twitter bio promises to show you how to get thousands of visitors overnight, but only has 17 himself, or the evangelist who’s business model requires that she has tens of thousands of followers to succeed. For her, a lot of it is about the numbers.

Now let’s be honest: the bigger your network, the more people you can reach. All things being equal, that’s a good thing. If you ask a question and you have few followers, expect few answers. If you have hundreds or thousands of followers, expect a lot more responses.

There’s also the matter of “social proof”: without anything else to go on, we often “trust” someone with a lot of followers, or who gets a lot of comments on his blog or video. Twenty-five thousand followers can’t be wrong… right?

But beyond that, social media is not an arms race. It’s better to have 100 followers with whom you regularly engage than 10,000 who never pay attention to you.

Rule 5: You Need to Have a Lot of Comments on Your Blog

I won’t lie to you: I fall for this one, too. I wish I had hundreds of comments for every post I put out there. It’s nice to know you’ve motivated people to stop consuming and start engaging.

That being said, comments aren’t clients. Comments don’t keep the lights on. In fact, focusing on comments can be detrimental to your business. I know of businesses that quit blogging because they weren’t getting many comments on their blog. They stopped creating new blog posts that would have increased their online visibility and generated more online leads.

If comments are your business goal, then blog about politics, religion or Justin Bieber. If growing your business is your goal, then focus on whether your blog appears in the search engines and delivers warm leads to your website.

Of course you can. This has become even easier over the years with changes to Google Analytics that specifically measure social traffic and conversions.

Even if you’re not paying too much attention to your Google Analytics, (shame on you!) you can post a pizza special to Facebook with a discount code. Every time it’s claimed, you know it works.

There’s only one (good) reason to use a specific social platform for business: your audience is there.

There’s no platform that’s right for every company. If you’re using social media to grow a business, you need to focus on the sites and applications that are already being used by your target audience.

That’s not to say you shouldn’t play around on new channels as they emerge. Being an early adopter has its advantages. With few brands on a channel, you’ll have less competition for attention. Also, you’ll speak the language; you’ll be seen as a member of the group, and not an interloper.

One Rule Worth Following

Provide value. That’s it. In social media, people can unfriend, unfollow or unsubscribe from you in a single click.

To prevent this from happening, you need to provide value to your ideal customers with every tweet, every update, and every blog post.

And keep in mind that value is in the eye of your ideal customer. Create content that’s valuable to them, not you, if you want to keep their attention.

Have you heard some social media advice you’ve decided to ignore? Or something you wish more people would adhere to? Let us know in the comments below.