Recently, a friend of mine joined Twitter. I immediately became her second, third and fourth follower, through a few different accounts I run. (See, it pays to be nice to me.)

She’s a pretty cool cat, but I realized she’s got a long way to go to build any type of following that will help propel her company or personal brand.

With that in mind, I decided to put together a framework for how you can quickly build a valuable following on Twitter, even when you’re starting from scratch.

Before you start following anyone or even tweeting, you should establish an attractive, engaging profile. Your profile is made up of the following: 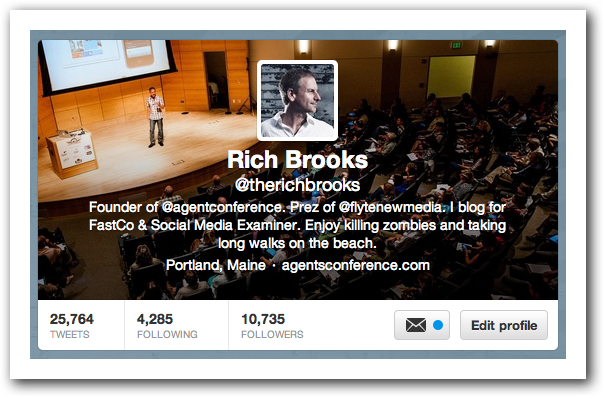 In addition, you should tweet out 5 – 10 times minimum before trying to attract followers or even following anyone yourself.

When you follow someone, Twitter gives them a heads up–often by email–that they have a new follower. If they click on the link to your profile and you haven’t said anything, you’re not giving them much reason to follow you.

On the other hand, if you have an engaging profile and some interesting, valuable tweets, you’ll greatly increase your chances of getting a “follow back.”

To find the right people to follow, start with people you know in real life. Twitter offers a Find Friends tool that allows you to upload your email database (assuming you use a popular email program like Gmail or Yahoo mail) and find your connections that already are on Twitter.

You can then follow any or all of your contacts on Twitter, who will receive notice that you are now following them, and a link to your profile.

Beyond this initial group of friends and associates, you can use tools like WeFollow or Twellow to find prospects, thought leaders or like-minded people. You can also find great people to follow by searching and subscribing to other people’s Twitter lists.

In my opinion, Twitter lists are the most valuable, least utilized tool on all of Twitter. Lists are simply groups of accounts organized by you. They can be organized around an industry, geography, or made up entirely of people with mustaches.

You can create your own lists of up to 5,000 people, or subscribe to a list that someone else has created.

Creating and following lists are a great way to improve the signal to noise ratio on Twitter. Using a 3rd party app like TweetDeck or Hootsuite, you can create columns for your lists to improve your engagement and listening. 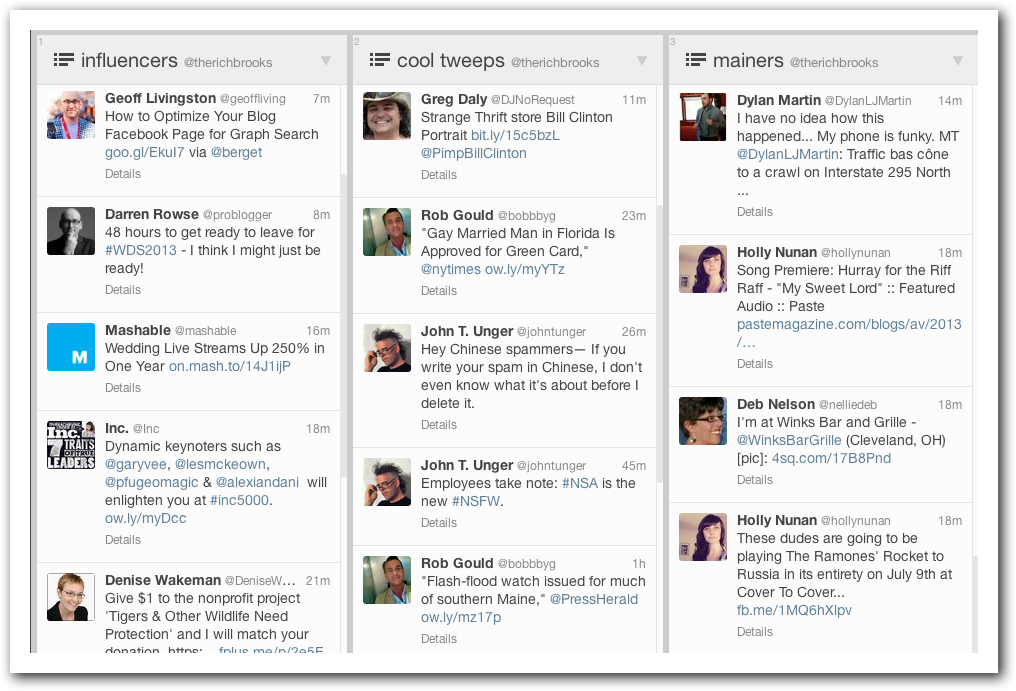 Here are just a few ways you could use Twitter lists for your business:

Well, at least often. While a few people may unfollow you if you tweet too much, generally the more you tweet, the more followers you attract. Just always strive to provide value in your tweets.

Talk With People, Not At Them

When I see that someone’s Twitter feed is nothing but links to their blog or their activity on Facebook, or they’re always promoting but not engaging, I’m unlikely to follow them.

If you have five minutes between meetings, jump onto Twitter and see if you can answer someone else’s tweet, or pose a question of your own.

If you don’t have something to add to a tweet you like, consider retweeting or favoriting that tweet…both will be reported back to the original tweeter, increasing your visibility to them. Retweeting is the act of sharing someone else’s tweet (with citation) to your audience. Favoriting is the equivalent of “liking” or even bookmarking a tweet.

Twitter users created hashtags to organize tweets. People now use them for a variety of reasons, from talking about a specific topic (#oscars, #bostonstrong, #smallbiz, etc.) Those hashtags become links so you can follow the conversation more easily.

Following and using hashtags in your tweets can help you find interesting conversations, and generate more meaningful followers. 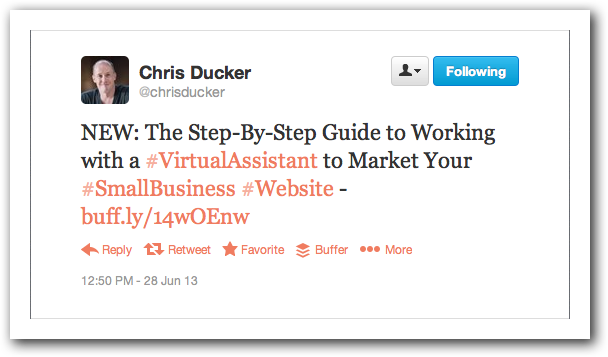 Twitter is a great tool for driving traffic. Tweets with links in them often get retweeted, shared and favorited, increasing your visibility and likely your followers.

It doesn’t have to be your content you’re sharing, either. In fact, people are probably more likely to share your tweets if they’re not self-promotional.

Many people have built up sizable followings just by becoming a curator: sharing great content from others. We follow these curators because they help us cut through the data smog to get to the content we value the most. 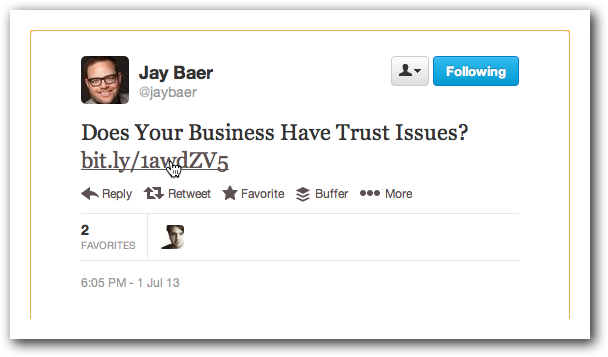