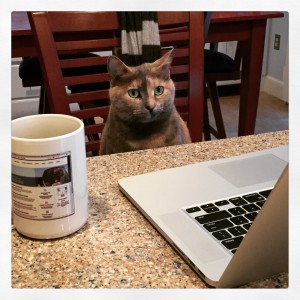 Having a big following on Twitter is great, but turning your followers into email subscribers will generate far more leads and sales for your small business.

Bonus: this title is misleading. With the approach below you can capture emails from anyone on Twitter, whether they follow you or not!

I’ve been asked many times how you can capture email addresses from your Twitter followers. Thankfully, Twitter doesn’t share email addresses with other users. However, there are ways in which you can turn not just your followers, but any Twitter user into an opt-in subscriber to your email list. In this post, I’ll show you how.

Why Do You Want Followers’ Emails?

Because opt-in subscribers are more valuable than Twitter followers. Period.
Although many entrepreneurs and marketers want to build a big, powerful following on Twitter (@therichbrooks included), I’ve seen time and time again that you get better results and ROI (return on investment) from an opt-in email list instead.
Let’s consider a typical tweet. When I post something to Twitter, an average of 370 of my 12,500 or so followers are served that tweet*, which Twitter refers to as an “impression”.  So, I’m seeing about a 3% impression rate. And just because Twitter serves up a tweet of mine, doesn’t mean even those who “see” my tweet are actually seeing it. Walk away from the computer, even turn your head for a few moments, and that impression is lost on you.
Further, I would argue that a Twitter “impression” is not as valuable as an email “open,” since it doesn’t require taking an action. It’s passive, compared to the action of clicking the open button on email.
Now let’s compare that tweet to an opt-in email. Although it varies by industry, common email open rates are around 15% – 20% these days, meaning one out of five or one out of six subscribers are opening your emails.
Even when your subscribers just hit delete because they’re not compelled to open your 101 Ways to Save Money for College or Free Shipping on Orders Over $100, they’re still being reminded that you exist and you can help them save money for college, get free shipping, or whatever other value you can provide.
Depending on the amount of people you follow, while you read this post hundreds or even thousands of tweets will float past on the River of Twitter, never to be seen again. Meanwhile, all the emails that you’ve subscribed to are still sitting in your inbox, waiting for you to take action on them.
In short, email marketing offers higher visibility, higher deliverability, and higher engagement compared to Twitter.
Yes, Twitter is a powerful networking and marketing tool. You don’t have to sell me on that. But you’re still building your house on someone else’s land. Twitter could whither and fade, or make changes like Facebook has where it becomes more difficult to reach your audience. Your email list is your own, even if you’re using a 3rd party service like Constant Contact.
So it’s time to start working on bringing some of those people from the networking event back to your office.

What is a Subscriber Worth?

If you have experience in marketing or advertising, you may already know what it costs to get a new customer. If not, here’s a primer on figuring out your customer acquisition costs.
You may also know what your average customer will spend with you over the course of their lifetime. If not, you may want to calculate the lifetime value of your average customer.
Or, if you’re like me, you’ll just fudge it. Or use a dart board and a blindfold. Your call.
Now a subscriber isn’t the same thing as a customer; rather, it’s just a step on the path. So you’ll also want to have a rough idea of how many subscribers become customers.
Since we’re going to be looking at Twitter’s ad platform, it’s a good idea to have a rough idea of what you’re willing to spend to get each new subscriber. Fifty cents? A dollar? Five dollars? It depends on you, your industry and the lifetime value of your average customer.

There are a few things you’ll need to turn followers (and non-followers) into subscribers:
A valuable offer is your “lead magnet.” It’s the thing that’s going to get someone to give you access to some of their most treasured, valuable, and protected property: their inbox.
At flyte, we decided that we were going to use a free webinar as our offer this time around. Here’s how we did it:
When people sign up for our webinar, they are also opting into our email newsletter (and we let them know that.) The free webinar is the lead magnet in this case.
Once we configured our offer, it was time to use Twitter’s ad platform to drive traffic and conversions.
I visited ads.twitter.com and chose the Website clicks and conversions campaign, since that best described what I was looking to accomplish. 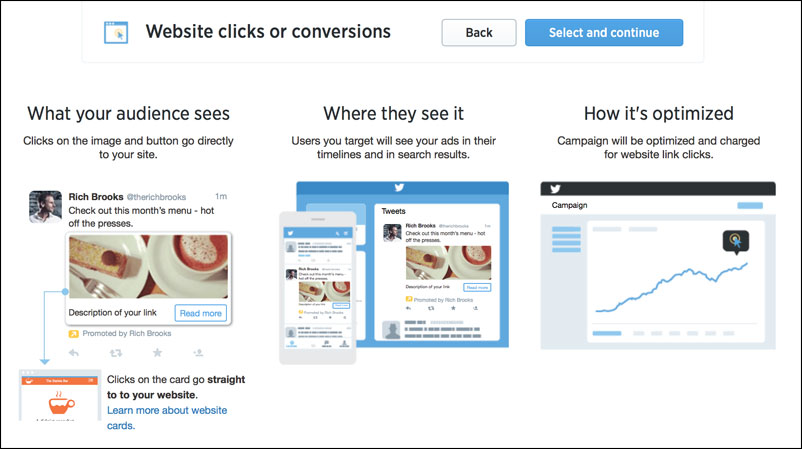 A Twitter ad campaign has four parts:
In Campaign Information section I gave my campaign a name and specified whether I want a specific start and stop date or for it to run continuously.
I could also add a website tag for conversion tracking. Because we had other ways to measure the ROI I didn’t take this step, but I will next time. 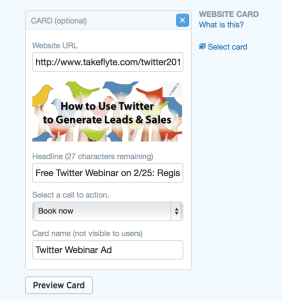 In the Creative section I created a new tweet (as opposed to recycling an existing tweet.) I also created a Website Card, which Twitter describes as “extra content that enhance your tweet.” There are five elements to creating your Website Card:
You can preview your card so you can see how it will look across different platforms, such as iOS, Android, and desktop devices.
In the Targeting section you can narrow the reach of your ads to your ideal customer base. You can target by location, gender, keywords, interests, and more.
In the Budget section you determine how much you’re willing to spend. Twitter requires you to set a daily maximum, but you can also set a bid on what you’re willing to pay for each lead. Twitter will set this automatically by default, but you can click on Advanced Settings to access the Manual bid process.
In this case, Twitter will show you what other advertisers are bidding. Remember, this is only a bid ceiling. My experience is that I’m paying much less per engagement than what I set as a maximum, anywhere from $0.30 to $0.55/click.

How Do You Keep from Paying for Current Subscribers?

Using Twitter ads, you may want to target—or at least include—your current customer base. However, since the goal of this campaign is to capture email addresses, we don’t want to target our current email list. In fact, we want to exclude them from this campaign. Why pay for leads we already have?
In the Targeting section, there’s a section called Limit targeting by excluding tailored audiences. Twitter allows you to upload email lists to the ad platform and either target or exclude these emails. In this case, I took my email subscriber list from Constant Contact and uploaded it to Twitter ads. I then excluded this list, meaning that my current email subscribers won’t see these ads and I won’t be charged if they click on them. 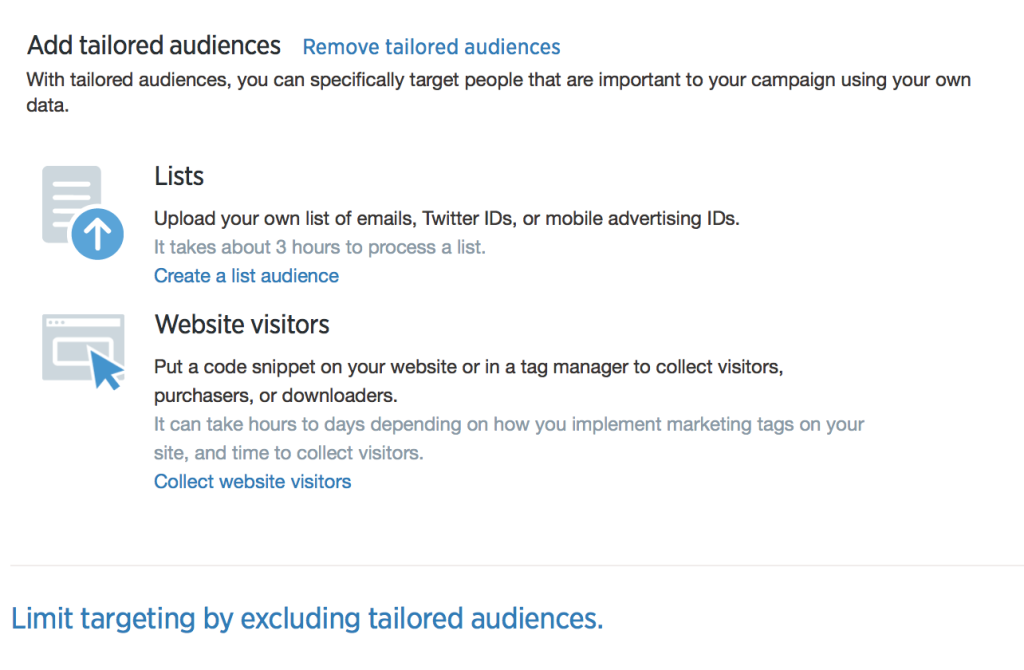 Now, it’s not that I don’t want my current email list to attend my webinar. I do! I just don’t want to pay Twitter to advertise to them, when they’re already on my list. So separately, and using a different tracking URL (courtesy of URL Builder), I sent out an email to my list.
Caveat: Twitter is only matching emails to users. If someone has signed up for our mailing list with one email and signed up for Twitter with another, Twitter doesn’t know that it’s the same person. Still, this is a fairly insignificant problem IMHO.

How Do You Measure Your Results and ROI?

When you visit ads.twitter.com, you’ll be greeted with a Summary Dashboard. You can see all of your campaigns here, or drill down into a specific campaign. 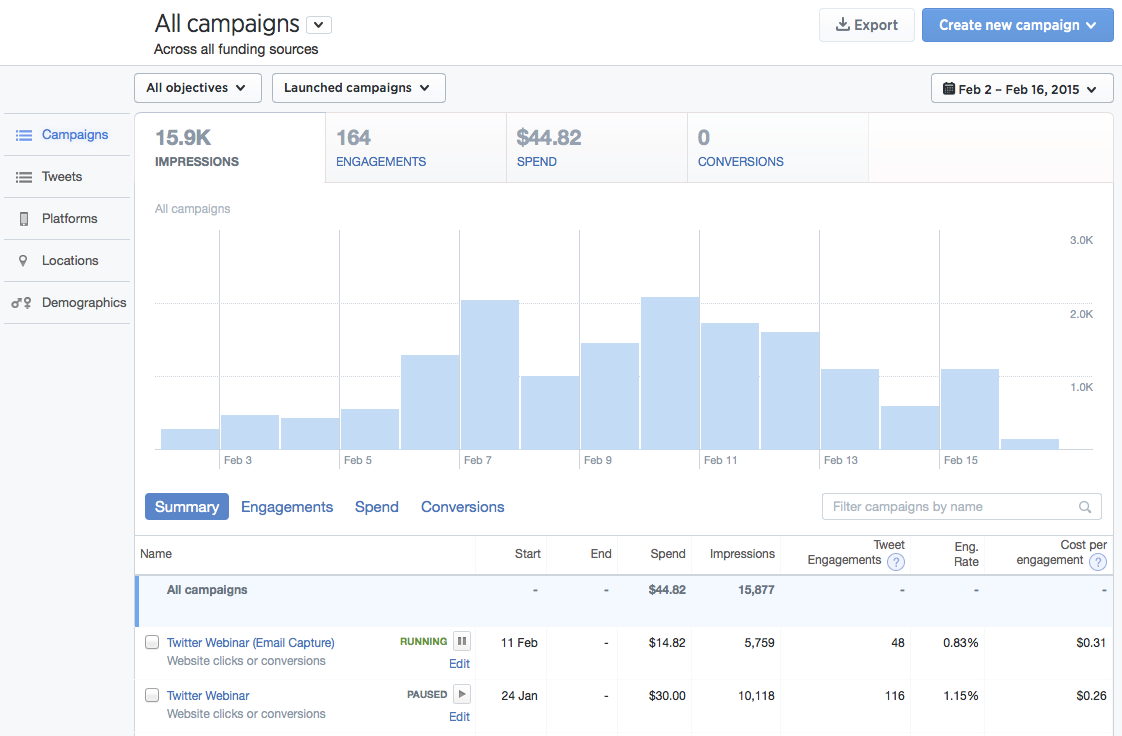 Twitter will show you your spend, the impressions you’ve received, the number of link clicks, the cost per link click, and the click rate. One cool thing about Twitter ads is that when someone retweets your tweet, every engagement from that initial retweet is free! This is incentive to compose creative, engaging tweets, even in your advertising!
If you use the Conversions tag, Twitter will also provide you a cost per conversion, which tells you how much it cost to get that lead. 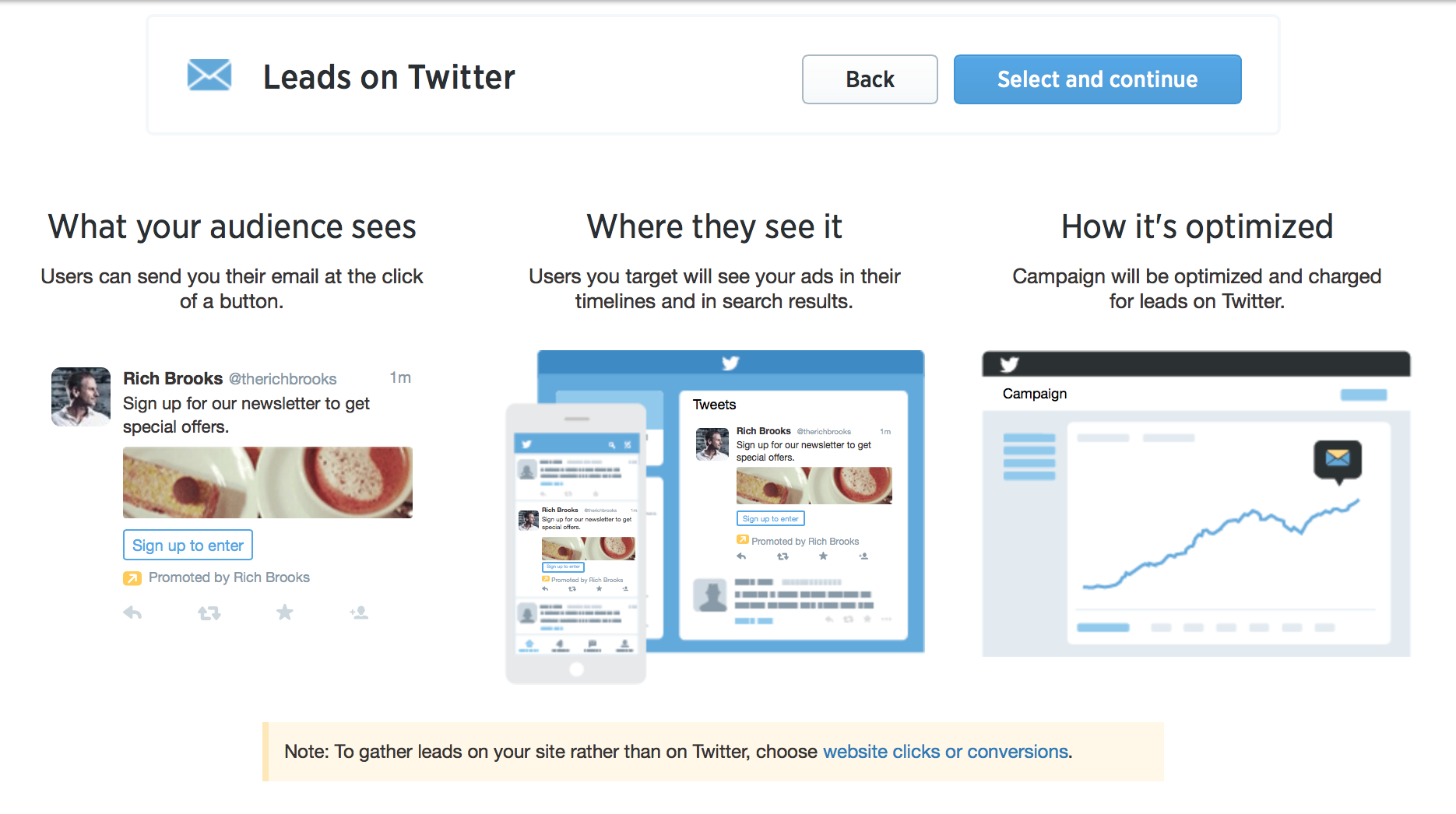 It also limits the amount of information you can gather to name, email, and @handle. You can download your leads through the ad manager, or connect it to certain CRMs automatically. If you’re looking for quick signups, Leads on Twitter may be worth checking out. However, for the webinar I wanted to collect more user information, so it wasn’t a good fit for me.

My results were…OK. I only received a 1.15% and a .85% engagement rate for two campaigns I ran in the past couple of weeks. (Keep in mind you only have to pay when someone engages your ad.) I received 1,600 impressions and got about 170 people to my opt-in page. I currently have 110 people registered, and almost all of them have come from the Twitter ads.
Because of some , er, lessons learned, I changed the way I was tracking the campaign during it, so my numbers aren’t as pure as I’d like them.
However, all of this only cost me $45 in ads.
I’m definitely going to keep using Twitter ads for the time being. Here are some of the steps I’ll take to make my next campaign even better:
How about you? Are you going to try a Twitter ad campaign?
BTW, if you’d like to learn more about all the Twitter ad campaigns and how to build an engaged following, be sure to check out our Twitter webinar on 2/25. And yes, that’s a customized URL, too!
Rich Brooks
Talk to me on Twitter!
*Based on the previous 28 days of activity when I wrote this post. YMMW.