Calling on Prospects: How Much is Too Much? 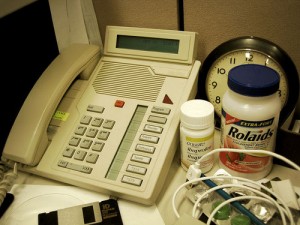 The other day as I left yet another voicemail for a prospect who hadn't returned my previous few calls or emails, I wondered how many unreturned “touches” most people leave before giving up, so I quickly tweeted my question.

I was surprised that the answers that came back were almost invariably one or two, although Marty Hamre's magic number was 7 and VirtualGalt invoked Brian Tracy's name in suggesting that 5 was the right answer. It was actually listening to Brian Tracy sales tapes back in my previous life that convinced me to make more attempts than the competition.

Intrigued, I asked “What's the max number of unreturned calls/emails/touches you would give a prospect before giving up?” on LinkedIn. There were 24 answers (and counting) to the question, and the people on LinkedIn (or at least those who answered the question) seemed to have a lot more tenacity than my tweeps.

Some of my favorite quotes…

If the prospect was important, unique, not just another prospect who could be supplanted by another…I would not give up. I'd continue until I reached the person intended, either leading to a “no” or a new business relationship.

Persistence is the only way to make great things happen, and to reach those special people who others give up pursuing.

I have been selling for years. I tend to not give up till I am told to get lost….Also in your emails and voices Tell them it's OK to say NO. Chances are you will get a NO back in an email rather than a return phone call to answer back with a NO!

For each marketing tool: Choose a guideline for how often you will reach out. e.g. how often you'll call prospects.

For each calling, in particular: Also choose a guideline for how many voicemails you'll leave before you put the prospect on a back burner.

Most people find a guideline of 3 to 5 tries works best.

After choosing your guidelines, apply them to all prospects. This helps avoid placing judgment too soon, which helps prevent frustration.

In general, it's best to continue to reach out to prospects forever. When you put prospects on a back burner, I just mean reach out less often. Or start using marketing tools for them that can happen more automatically; ie. enewletters.

Let me quote the speech Churchill once delivered, when asked to give his view on how to become successful.

He got up, walked to the microphone, and said:

And then he sat down again.

The barrier you experience is just as high for your competition. So once you're in, they'll have a very difficult time to get you out!

There were a number of great (and conflicting) answers, so I recommend you check them out.

My own .02? While things like how busy I am, my interest in the project, the size of the project, whether we've already send a proposal, and the current economy all impact my answer, my real answer is at least 8 – 10 touches.

Most people give up after just one or two attempts. Personally, when a sales person calls me, I often don't return the first or second call (especially on a cold call.) I need to see that the sales person is really interested in working with me before they get my full attention.

I assume that my prospects are busy running their own business and they have fires to put out. After 5 or 6 calls/emails/touches I'll often leave messages along the lines of:

Still haven't received the cease and desist letter from your lawyer, so I assume it's safe to keep calling…

Hi, this is the tenacious Rich Brooks calling again. Just imagine how hard I'll work for you when you're paying me….

Or something along those lines.

What's your .02? How often would you contact a prospect before giving up?