Are your tweets falling on deaf ears?

Ever wonder how some people can get dozens of favorites, retweets and conversations around their tweets, while yours appear to be playing to an empty concert hall?

If you're not getting the engagement you want on Twitter, you may be making these easy-to-fix mistakes:

Imagine walking into a comedy club in Portland, ME and cracking jokes in Mandarin Chinese. Yes, there may be a few people who get the joke, but most of them will tune you out.

Or breaking into a conversation about the government shutdown and you start talking about your daughter's soccer team's chances in the playoffs. While there might be some people who would be happy to have that conversation, most people will just see it as an annoying interruption that is completely off topic.

Even if we're on Facebook, which most of us are, it's as if you're interrupting our conversation. You're asking us to stop our conversation and engage with you in another room (or channel.)

The same goes for your “I just liked a video on YouTube,” Pinterest updates, and the dreaded, “more for Pieces” astronomy tweets.

The only exception I've found is the paper.li tweets, as they're unique and engage one to three other Twitter through mentions.

This isn't to say you can't promote your Facebook activity (or any other channels you're working on.) Just disconnect the automatic post and tell people in Twitter-speak why they should visit your Facebook page. 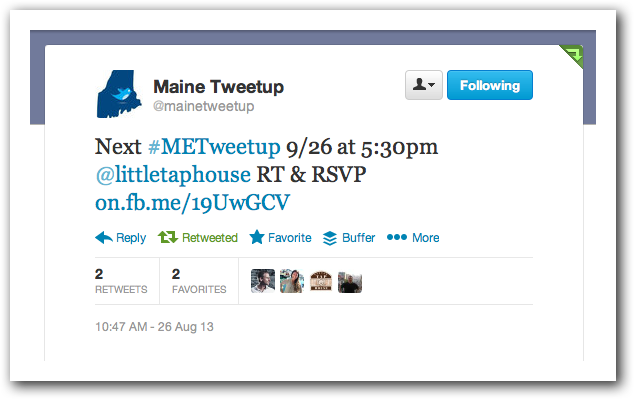 You're ignoring the law of reciprocity.

Don't expect people to share your content if you're not first sharing theirs. If your twitter feed looks like a greatest hits of your own blog posts, people aren't going to be going out of their way to promote your stuff…after all, that appears to be your job!

Instead, find time to promote the cool work or clever tweets of others. Remember that every retweet and mention gets reported back to the originator of that tweet…which puts you right in front of their view finder.

You're not talking to, you're talking at.

Take a look at your Twitter feed. Is it filled with you sharing your latest blog posts or podcast episodes? Is it you sharing your brilliant bon mots with an invisible audience? Is it a conversation or a soap box?

If you're not talking with other people on Twitter, you're talking at them. You're treating Twitter like any other one-way, broadcast channel. And while some people do talk back to the TV or movie screen (a cranky blog topic for another time), most of us just change the channel.

Or in the case of Twitter, most of us just stop engaging with you.

You use the word “follow back,” or worse, the hashtag “teamfollowback” in your bio or tweets.

If you're funny, interesting or provide some other type of value to me or my business, I'll definitely follow you back. If you're biggest claim to fame is that you'll follow me back while you ignore me to get other followers, then I'm not interested.

You have an auto-DM (direct message) for all your new followers. Maybe it's a link to where they can friend you on Facebook, or a link to your free e-book (oh, you're SO generous!), or simply a thank you for following, and that you're really, REALLY looking forward to their tweets.

While this may work on other channels, it comes across as spammy and artificial on Twitter. Cut it out.

Most of these rules can be boiled down to this one law: Be human on Twitter.

If this is new and strange to you, try it for 30 days and let me know how it works out.

And if you want to try out some of these new engagement techniques on me, you can engage me on Twitter @therichbrooks.