I was planning on using QR codes for an upcoming campaign, but yesterday someone told me I should use Microsoft tags instead. They said it was because you can change a Microsoft tag but you can’t modify the content of QR codes. Which do you recommend?

In a recent campaign for an independent film we used QR codes in our marketing. Initially the QR codes had information about the debut of the film at SXSW, but over time we wanted to direct people to local film times, the website, and even to download the mobile app. To accomplish this all we did is have the QR code point to a page on the main site which we could redirect wherever we like. It accomplishes the same “feat” as the Microsoft tag, but without being beholden to an outside vendor.

Now, onto your question of whether you should choose QR codes or Microsoft tags for your marketing campaign:

It’s unlikely that both of these bar codes will survive; one will go the way of the Betamax…but which one?

Microsoft has deep pockets, so they can continue to force it upon consumers for a while, even if consumers aren’t that interested. However, Microsoft doesn’t have the presence in mobile that it did in desktop computing. Google and Apple are in the lead for smart phone technology, and chances are they’d rather support an open-source solution than one that would help Microsoft.

Also, check out this graph of searches on “qr codes” (blue) vs. “microsoft tags” (red). 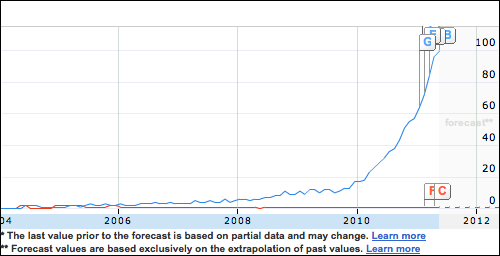 It appears that the buzz is solidly behind QR codes. Anecdotally, I’ve never seen a Microsoft tag in the wild, but I’ve seen plenty of QR codes.

Lastly, no one “owns” QR codes, so you’re unlikely to see a message like this, which I found on the Microsoft Tag FAQ:

Microsoft may elect to start charging for future or additional value-added features or services related to Tag.

While I can’t promise that QR codes will beat out Microsoft tags for the hearts and minds of consumers and businesses, they appear to have the early lead.