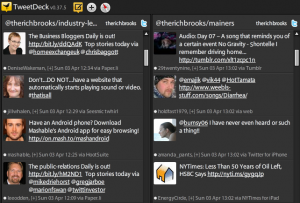 For example, I wanted to pay more attention to the people in my home state of Maine, so I created a group called Mainers. (When I hit Twitter’s ceiling of 500 people in a list I created a second list called MainersToo.) I also created Industry Leaders so that I could quickly get the best information on web marketing and social media.

In short, Twitter lists allow you to separate the wheat from the chaff, and improve your signal to noise ratio. This is especially important when the list of people you follow starts to blossom.

You can also use Twitter lists to help you at your next networking conference. For example, I’m heading out to San Diego to present at the annual NAPO (National Association of Professional Organizers) conference. I wanted to start connecting with other attendees while they were still packing their well-organized travel bags, and I wanted to keep up on the conversations once the conference got into full swing. Here’s how I did it using a Twitter list:

The first thing I did was create a new Twitter list which I called napo2011. I noticed that the conference had an official hashtag: #napo2011, so I went through the people who were already using the #napo2011 hashtag and added them to the list. I also saw there was a NAPO tweetup planned during the conference, so I added all the people who said they were attending to my list as well.

I then tweeted out that I had created a list of NAPO 2011 attendees:

I started a list of people attending #napo2011 If you’re going & not on it, let me know! Please RT! http://bit.ly/gJWSXQ

I also DM’d (short for Direct Message, aka a private message) to some of the attendees I was friendly with, asking them for a retweet, which most of them did. After that, a number of people retweeted my message and also asked to be added to the list, which I immediately did.

Obviously, and selfishly, cultivating this list doesn’t hurt my visibility, and will hopefully get some more people to attend my presentations at the conference, as well as increase my Twitter followers.

While it’s true that people could follow the #napo2011 hash tag, the downside is that many people neglect to add a conference hashtag to every tweet; it really depends on the conference.

This technique can work just as well for a big conference like BlogWorld or SXSW, with a small twist. Obviously, there are too many people on Twitter who attend these type of events to be put on just one list. Plus, most of them are savvy enough to be tagging all their tweets with #bweny or #sxsw. However, I’ll often start a small, cultivated list of people who I want to meet at these events, then add more people to that list as I meet them during the event. That helps me easily keep tabs on my new friends, see which sessions they’re attending, and where they want to meet up afterward for a beer.

Pro Tip: Don’t neglect to put yourself on your lists.