Recently, my Twitter client of choice, TweetDeck, added a new “feature” called Deck.ly. What Deck.ly allows you to do is to post messages to Twitter that are more than 140 characters. It’s not the first time or the only way to add longer posts to Twitter, but it was definitely the most in your face option if you use TweetDeck.

In fact, when Deck.ly was first released, TweetDeck wouldn’t let you shut this annoyance off.

Why do I (and I’m not alone, judging by the outcry), hate Deck.ly? Because it’s cheating. As a writer (or at least someone who likes to write), the beauty of Twitter was the challenge of getting your point across in 140 characters or less. Sure, there are times when I need more than 140 characters to express myself…that’s what blogs are for. Or videos.

Deck.ly is wearing floaties in the kiddie pool.

Deck.ly is the child-proof scissors of social media.

Deck.ly is training wheels in the Tour de France.

Deck.ly is bumpers on bowling lanes.

In short, if you can’t express your thoughts in 140 characters, Twitter isn’t the right channel for you.

Luckily, the developers of TweetDeck heard the outcry (or at least they heard what they wanted to hear) and created a TweetDeck update that allows you to disable Deck.ly. Just go into preferences and shut off “Use Deck.ly for sending long updates.” 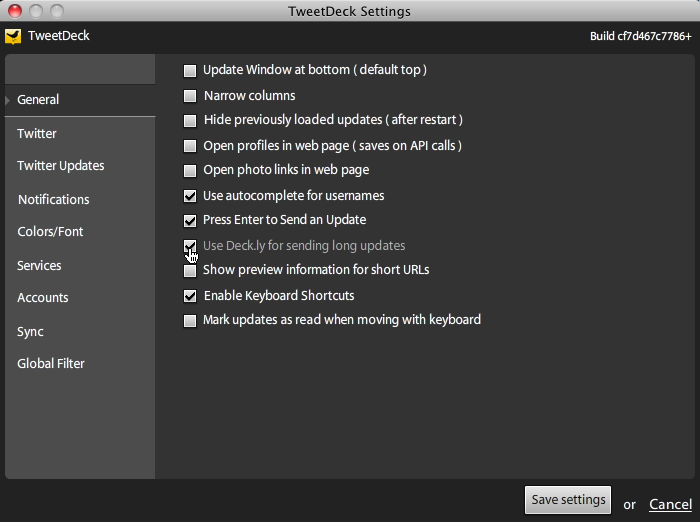 Once you uncheck that box you’ll be back to tweeting without a net in no time, leaving Deck.ly for the n00bs.

One Response to “How to Disable Deck.ly in TweetDeck”