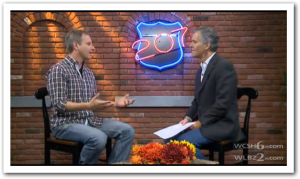 Want to take some of the social out of social media? Want to share your deepest secrets with the world…anonymously? Then you may want to check out Whisper, Secret, and & Yik Yak, among others.

It had been a little while, but I was back on 207 the other day, talking about a category of apps that allow you to hide behind a veil of anonymity.

While tools like Facebook and LinkedIn want to link profiles to real people, there is a popular movement to allow people to post and share without revealing their identity. In this session we look at three apps in this category, and talk about whether anonymous apps are a force of good or evil.

Here's a brief synopsis of what Rob Caldwell and I discussed:

Let's first talk about Whisper. What's Whisper all about?

Another popular anonymous tool is Secret…how is it similar and different?

Yik Yak: What is it, and why is it being banned in schools across the country?

What do you think about anonymous apps? Good or bad? And are there any you use that we should have covered? Let me know!

Rich Brooks
Can you keep a secret?